The Broncos' unrestricted free-agent list is among the deepest in the league, and based on early reports, the interest is strong from other teams in some of their players with expiring contracts. 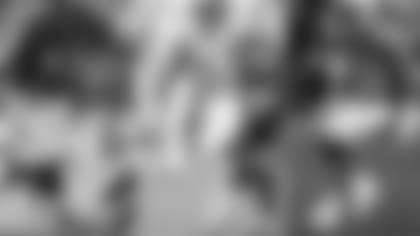 1. G/OT Kelechi Osemele, Baltimore
Reports that Osemele and the Raiders have agreed in principle on a deal comes as no surprise; he was going to command a big deal worth an eight-figure average per-year outlay.
2. RB Doug Martin, Tampa Bay
3. S Eric Weddle, San Diego
4. C Alex Mack, Cleveland
5. NT Damon Harrison, N.Y. Jets
6. OT Mitchell Schwartz, Cleveland
The Schwartz was with the Browns last season, and he teamed with left tackle Joe Thomas to give them perhaps the league's best tackle combination. Schwartz did not surrender a sack in the second half of the season, and has been an above-average pass protector on the right side since his rookie season, when he became an immediate starter.
7. CB Sean Smith, Kansas City
8. ILB Derrick Johnson, Kansas City
9. S Walter Thurmond, Philadelphia

10. OLB/DE Bruce Irvin, Seattle
11. TE Antonio Gates, San Diego
12. OT Kelvin Beachum, Pittsburgh
Beachum was emerging as one of the AFC's better left tackles before he tore his anterior cruciate ligament against the Cardinals last October. Even though that injury will probably limit him during offseason work, his high potential -- demonstrated by his work in pass protection and his ability to spring Le'Veon Bell for plenty of runs -- will probably ensure his time on the open market is brief.
13. RB Lamar Miller, Miami
14. ILB Jerrell Freeman, Indianapolis
15. CB Prince Amukarmara, N.Y. Giants
16. DT Nick Fairley, Los Angeles
17. OT Donald Penn, Oakland
18. S Reggie Nelson, Cincinnati
19. OLB Tamba Hali, Kansas City
Reports circulated Tuesday that the Chiefs agreed with him on a three-year deal, ensuring that the Chiefs' edge rush will still have pop and depth next season, with Dee Ford rotating in with Hali and Justin Houston.

20. QB Ryan Fitzpatrick, N.Y. Jets
21. G Alex Boone, San Francisco
22. TE Ladarius Green, San Diego
Green is an effective complement who could be in line for a bigger role after moving the chains on 64.86 percent of his receptions last year, fourth-best among the 32 tight ends with at least 30 catches. His production has steadily increased throughout his career, and he's ready to be a team's No. 1 tight end.
23. OT Russell Okung, Seattle
Shoulder surgery might cause him to linger on the market, but his performance and the scarcity of left tackles ensure that he will get a sizable contract.
24. WR Travis Benjamin, Cleveland
25. S Rodney McLeod, Los Angeles
26. RB Matt Forte, Chicago
27. G Jahri Evans, ex-New Orleans
After 10 seasons as a starter, the Saints released him in a cap-saving move following a campaign in which the durable 32-year-old lineman missed more games (five) than in his first nine seasons combined (two). Working with quick-firing quarterback Drew Brees, the six-time Pro Bowler allowed just 12 sacks in the last four seasons and 27 in the last nine, according to ProFootballFocus.com.
28. NT Ian Williams, San Francisco
29. S Husain Abdullah, Kansas City

30. CB Leon Hall, Cincinnati
31. WR Marvin Jones, Cincinnati
32. S Isa Abdul-Quddus, Detroit
33. TE Benjamin Watson, New Orleans
Reports that the Ravens had agreed to terms with Watson broke Tuesday, taking the most productive tight end in the 2016 free-agent class off the market.
34. RB Alfred Morris, Washington
35. CB Casey Hayward, Green Bay
36. DE Cedric Thornton, Philadelphia
37. G Louis Vasquez, ex-Denver
38. DE Charles Johnson, ex-Carolina:
It didn't come as much of a surprise when the Panthers released him, especially after Kony Ealy began emerging as an outstanding force off the edge -- as the Broncos saw first-hand in Super Bowl 50. Although he comes off the edge, at 282 pounds he only fits as a 4-3 defensive end; that's the role he had in Carolina, where he had a double-digit sack output as recently as 2013 (11 sacks). Johnson doesn't turn 30 until July, so he should still have some production left if he can stay healthy.
39. G Jeff Allen, Kansas City

40. OLB Mike Neal, Green Bay
41. DE Jason Hatcher, ex-Washington
42. G Zane Beadles, ex-Jacksonville
43. DE/OLB Junior Galette, Washington
44. DT Brandon Mebane, Seattle
45. DE Robert Ayers, N.Y. Giants
46. G Geoff Schwartz, ex-N.Y. Giants
Injuries have cost him 19 games in the least two seasons, and he hasn't played and started a full 16-game schedule since the 2010 season with the Panthers, his second in the league. But the 29-year-old remains one of the league's best interior run blockers -- and one of the sport's best follows on Twitter. His intelligence also ensures he can pick up a scheme quickly.
47. DE Jason Jones, Detroit
48. CB Patrick Robinson, San Diego
49. QB Robert Griffin III, ex-Washington
Washington's decision came as no surprise, and perhaps no one on the market will benefit more from a fresh start than Griffin, who remains a rifle-armed passer but could use some refinement.

60. C Stefen Wisniewski, Jacksonville
61. NT Kevin Williams, New Orleans
62. CB Sterling Moore, Tampa Bay
63. ILB Zach Brown, Tennessee
This is higher than most people will have him, but he was trapped in a cluster at the one position where the Titans possess depth: inside linebacker. He never won back the job he lost when he tore a pectoral muscle in 2014.
64. TE Coby Fleener, Indianapolis
With Dwayne Allen re-signed to a four-year contract that could be worth up to $29.4 million, the Colts appear content to let Fleener hit the market. Fleener has been a victim of lofty expectations and will benefit from a fresh start.
65. CB Sterling Moore, Tampa Bay
66. S Tyvon Branch, Kansas City
67. DE Greg Hardy, Dallas
68. G Mike Harris, Minnesota
69. DE Chris Long, ex-Los Angeles

70. TE Scott Chandler, ex-New England
A knee injury resulted in his release with the "failed physical" designation, but as he showed during the brief period when Rob Gronkowski was out in Week 12, he can make some downfield plays. What works against him is his age (30). He has already reportedly scheduled a visit with the Colts.
71. WR Jermaine Kearse, Seattle
72. OLB Vincent Rey, Cincinnati
73. ILB Rolando McClain, Dallas
74. K Adam Vinatieri, Indianapolis
75. OT Andre Smith, Cincinnati
It's not a question of talent, but conditioning and health. The last two seasons have not been kind to Smith, as he has struggled in pass blocking and with injuries. Smith has missed nine games the last two seasons and has only started all 16 games once in his career, in 2012.
76. RB/FB Mike Tolbert, Carolina
Ball skills are what separate Tolbert from other fullbacks on the market. Tolbert's Super Bowl fumble was his first since 2011; it spoiled a season in which he not only delivered solid work as a blocker, but chipped in 410 yards from scrimmage and four touchdowns on 80 total touches.
77. ILB Craig Robertson, Cleveland
78. TE Zach Miller, Chicago
79. WR Mike Wallace, ex-Minnesota
The grass proved to not be greener for Wallace, whose numbers have been in a steady decline since he left the Steelers after the 2012 season. He turns 30 in August and is still young enough for a rebound, but he's best used as a complementary receiver.

Breaking down the Broncos' initial roster at the 53-man deadline

With injuries striking players such as Jake Butt, Drew Lock and Theo Riddick in recent weeks, the Broncos had some tricky waters to navigate and will likely be busy in the coming days.

Malik Reed was a force, Khalfani Muhammad and the running game got going in the third quarter, and punter Colby Wadman had an impressive night as the Broncos concluded the preseason.

Keishawn Bierria's fourth-and-goal tackle was one of two fourth-down stops in the red zone that defined an outstanding night for the Broncos' front-seven depth.

Broncos-Rams: What to watch

QBs Kevin Hogan and Brett Rypien are expected to get the snaps in a game that will likely showcase players competing to provide roster depth.

Emmanuel Sanders looked like his usual, explosive self. Given how the Broncos need his vertical speed, that was the best news of the night.

What to watch in Broncos-49ers

There are not many first-team positions up for grabs, but the returner spots are. Kelvin McKnight, who had an 18-yard punt return in the preseason opener, is in the mix.

Drew Lock noticed a difference in the energy of Denver's offense, which led to a productive practice. "We got the juices flowing early, so whenever that happens, you know it's going to be a good day," he said.

The 49ers ratcheted up the intensity, which players like Chris Harris Jr. embraced so they could learn more about their team. "I want to see who wants to compete, who shies away, who doesn't like the competition," Harris said.

But with San Francisco's George Kittle dealing with a calf injury, Chris Harris Jr. and the Broncos may not get the challenge they hoped to receive in the upcoming joint practices.

Now "it's time to get serious," as wide receiver Tim Patrick said. But on Tuesday, they treated the fans to an aerial circus.

Previously a safety, Carter now finds himself learning how to be an inside linebacker.

As the only healthy fullback on the roster, he will be busy with the offense during its team periods. But his work on special teams could determine whether he makes the 53-man roster.