As always, you can tweet questions to me with the hashtag #AskMase or use the submission form to your right (if you're viewing on a standard browser) or at the bottom of the page if you're on the mobile site.

For the Patriots game, do you think double-teaming Gronk is a good option? Unless putting CHJ on Edelman one-on-one is logical due to Chris' injury. Also, do you think the passing or run game of the Broncos is more important this week?

What you want to do is use deception and variance. Use some double-teams from time to time, and also show double-team looks but quickly change out of them at the snap. The only positive to playing the Patriots in the postseason is that you've had nearly six months of practices dating back to training camp, so at this point, you've worked on so many different concepts that your drawer is overflowing with tools.

Use them all, if necessary, because tomorrow doesn't matter without success today. As a certain Hall of Fame quarterback said:

As for the passing or the run game ... I'd give a slight edge to the ground game, because it can control the pace, prevent the Patriots' linebackers from attacking at the snap and open up play-action possibilities for the passing game. Even though Peyton Manning isn't going to execute the play-fake bootleg like Osweiler, a quick playfake can freeze the linebackers and safeties just enough to create coverage gaps that Manning can exploit. Using the run to set up the pass is totally old school, but if done properly, it can work in a big way.

@MaseDenver with CJ being the more effective RB against the Patriots last time, should he be the starter instead of Ronnie? #AskMase

As I've noted before, don't expect a change in who starts. First, the starter designation means nothing; they're going to split repetitions and snaps, with Kubiak willing to ride a hot hand if one gets going. Second, the Broncos have been far more productive on the ground with Hillman starting and Anderson relieving him; no coach is going to mess with what works, even if correlation doesn't mean causation.

Anderson had a big game working behind Hillman against New England in Week 12. He touched the football more often (19 to 15) and played 17 more snaps than Hillman that game, in part because he was so effective. Considering the improvement in Anderson's production on a per-carry and per-game basis since Hillman became the first-teamer, there is no reason to change this arrangement.

@MaseDenver Why do Kubiak led offenses have more success against the pats then most teams do? #AskMase

Because over the long haul, Kubiak has proven to be one of the better game-planners and play-callers in the league, and the historically above-average performance of his ground game has forced the Patriots to usually play more off-balance than they would prefer.

His offenses (Houston 2006-13, Baltimore 2014 and Denver 2015) have outperformed the league average against the Patriots for the last decade by a considerable margin.

The key rates bear this out:

But Kubiak's record against Belichick-coached teams the last decade is 2-5, in large part because the Patriots have racked up 33.29 points per game in those contests.

The 24 points the Broncos allowed New England in Week 12 were the fewest that one of his teams has allowed in his head-coaching career. The defense will need to be at least as good -- if not better -- this Sunday.

.@MaseDenver how many current @Broncos played for Josh McDaniels? #askmase

Safety Darian Stewart was on the Rams in 2011 when McDaniels was their offensive coordinator, but didn't play under him, per se, because he was on the other side of the ball. The same holds true for cornerback Aqib Talib, who played with the Patriots from 2012-13 after McDaniels returned to their staff.

I'm guessing you might have read Bill Barnwell's assessment of how our defense might have the best statistical probability of disrupting Brady; rushing 4 and blitzing less often. Also, an interior push should cause more discomfort than edge pressure because Brady is so comfortable in the pocket. Wolfe, Jackson, and Co. are the right guys but do you think Wade Phillips will go away from what he's done most all season? Your mailbag is great by the way.**

Thank you, and to reiterate a point I just made on a radio appearance with an Atlanta radio station, I agree that the interior pass rush is more crucial to the Broncos than the edge, simply because Brady's ability to throw the football in 2.21 seconds on average neutralizes the effectiveness of the edge rush.

It's not an accident that two of the Broncos' 3-technique defensive ends had two of the three sacks of Brady in Week 12: Vance Walker and Derek Wolfe. The pass-rush abilities of the 3-techs give the Broncos an asset that most Patriots foes do not possess.

Their rush, plus the occasional blitz through the A-gap -- and I mean "occasional," because this is NOT something on which you want to lean too heavily, otherwise the Patriots will adapt appropriately -- can provide the disruption the Broncos need.

Malik Jackson also made a great point Friday: You have to get your arms up quickly. If you can't get to Brady, find a way to make it difficult for him to deliver the football on those quick timing routes underneath and longer passes down the seam in which he anticipates Gronkowski's break. Look for Jackson, Wolfe and others to get their arms up as quickly as possible to create another obstacle for Brady.

With Chris Harris' shoulder injury, will he still be able to play press coverage and get physical with the receivers on Sunday?**

He's going to have to. His full participation in practice this week is a positive sign, as is his improved health that came from the two days of rehab work to begin the week. His shoulder is still sore, but he noted after last Sunday's game that he didn't make it worse.

If Harris can get his injured arm up and be appropriately physical when the Patriots' formations allow him to get up to the line of scrimmage and jam an opposing receiver, the Broncos have a chance of neutralizing an attack that, so far, no one has (at least in the games that Julian Edelman has played this season).

My question is what do you think of what these guys are saying? They are saying this game will be a tune-up for the Patriots.

I couldn't care less about the opinion of some guy in Boston of whom I've never heard until now. And even if I had heard of him, I'd just think, "Whatever." He's just looking for clicks, I reckon.

After the Cardinals-Packers game Clay Matthews suggested that "Let's go college rules. Just put us on the 25 or whatever it is and let us go at it," Don't you think NFL should consider adding that rule into the game? Another thing I dislike the most is that, after a first-down play the game clock doesn't stop temporarily (in college football it does) don't you think NFL should add that too in which it will allow the team to get an fair opportunity?**

Let me start with the notion of stopping the clock after each first down earned. That won't happen. NFL games are too long as it is and if there are any changes to the timing of regulation play, they will be made with the intention of shortening games. I can read a robust novel in less time than it takes to play a college-football game; those contests are absurdly long.

I'm in favor of teams receiving equal opportunity in overtime -- and yes, I know this would have removed the "magic" of the Tim Tebow-to-Demaryius Thomas touchdown of January 2012, but over time, any rule giveth and taketh. However, I don't like college tiebreakers -- at least, not immediately after regulation. Putting the football on the 25-yard-line to start each possession is such a contrived way to decide a game. (It could be worse; in some high-school jurisdictions, the football is placed at the 10!) To me, possessions starting at the 25 are a last resort to decide a game, akin to penalty kicks in soccer.

My proposed solution is simple, even though I know most won't like it.

(So before you yell at me, understand that I accept that I am a contrarian on this, because I'm influenced by having an English mother, a North Carolinian father who often mused, "I love a good tie," and wasn't referring to neckwear, playing soccer as a child and being raised with the notion that a draw is a perfectly acceptable outcome to a game. I don't subscribe to the more recent and generally American concept that WE MUST HAVE A WINNER. I can think of many NFL games -- including the Broncos-Seahawks game of September 2014 and the Broncos-Patriots duel in November 2013 -- where I considered a draw to be the most appropriate result.)

Does signing Derek Wolfe long-term have any significance positive or negative for Malik Jackson?**

It reduces the available cap room, obviously, but the Broncos are still hopeful that they can keep both, especially knowing how well Jackson and Wolfe work together as a tandem; they play off each other well when they get the chance to use each other to stunt and twist, and they create matchup problems on the inside. Nevertheless, the Broncos have some tough choices looming in the offseason, although re-signing Wolfe at least crossed one item off their to-do list. 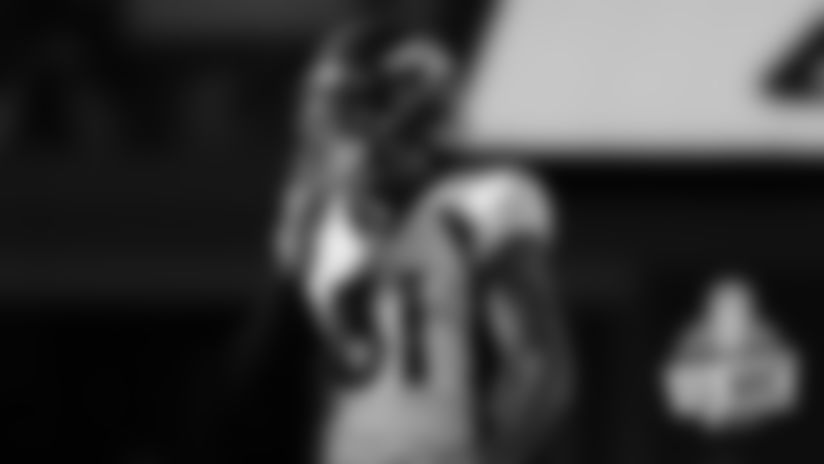 Ask Aric: Could anyone besides Justin Simmons receive the franchise tag from the Broncos?

Ask Aric: Looking at the start of George Paton's tenure

Aric DiLalla takes a look at the QB position, the Broncos' potential draft options, how analytics could shape Paton's tenure and more.

Ask Aric: How does Drew Lock's performance vs. Carolina stack up to his big day in Houston?

Ask Aric: What does the rest of 2020 and beyond hold for the Broncos?

Ask Aric: Which unheralded players have stood out because of injuries?

Ask Aric: What is the biggest takeaway from Denver's win in New England?

We've got a packed mailbag as we look back at a win over the Patriots and look ahead to a game against the Chiefs.

Ask Aric: How is the Broncos' matchup in New England impacted by its postponement?

The Broncos, for the second consecutive week, will prepare for a game against the Patriots.

Ask Aric: What is the Broncos' outlook after a win vs. the Jets?

Ask Aric: Is Jerry Jeudy ready to step up?

Ask Aric: How will the Broncos' secondary respond without A.J. Bouye?

Aric DiLalla answers questions about Noah Fant, how the Broncos match up with Pittsburgh and how KJ Hamler could be used this weekend.